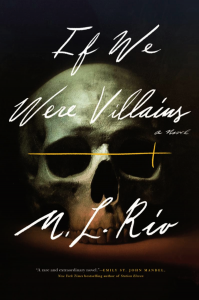 If We Were Villains by M.L. Rio is an intriguing mystery that keeps readers invested. The novel takes place at a small arts conservatory and focuses on the seven fourth-year acting students. Having survived the cuts at the end of their previous three years, they are closer than family. However, a tragedy that Shakespeare himself would be proud of rips them apart during their final year, as is revealed at the opening of the book, which is ten years after the students leave the conservatory.

Oliver, the protagonist, is finishing serving ten years in prison, but the details of the crime - and whether or not he actually committed it - are not entirely clear. The bulk of the story is told through Oliver’s memories and the details of his fourth year at the conservatory are revealed.

If We Were Villains is appropriate for older teens. It has some graphic content and violence and requires a mature reader to be appreciated. It is not for the faint of heart or those who are looking for a light, comedic read, though it does have its humorous moments. This novel is not the most suspenseful or fast-paced book, but the mystery and thoughtful writing style keeps readers interested. It’s never obvious what will happen next and the numerous possibilities throughout make it so that the reader doesn’t know which way the story will turn.

Since the book focuses on acting students at an arts conservatory where they exclusively study the works of Shakespeare, there are an incredible number of references to his plays. Half the time the characters speak in Shakespearean quotations in their conversations, and several scenes in the novel are during their performances of Shakespeare’s plays. This means that a deep understanding of Shakespeare will increase one’s enjoyment of the novel immensely, and a basic understanding of the Bard is almost necessary.

This novel is also likely to be more enjoyable and amusing if the reader has experience being an actor or part of the theatre world and can relate to the dynamics of theatre students. The novel’s references to type casting, off-book day, and cooky acting teachers may go underappreciated by an audience who is unfamiliar with the world behind the curtain. However, if one is familiar with these things, then the reading experience is made all-the more fun by these things. It is definitely a wonderful book for theatre people.

One negative aspect of If We Were Villains is the lack of character exploration and development. Readers don’t quite know the characters well enough, especially for a book in which the major conflicts are based on relationships. It feels like the characters are simply necessities for the plot to be carried out instead of real people.

Overall, If We Were Villains earns four out of five stars for its engaging plot that doesn’t get so complex that it is difficult to track. It is thoughtful, well-written, and, thanks to its many references and parallels to Shakespeare, can be read with in-depth analysis or just as an interesting mystery, depending on the reader’s preference.

If We Were Villains (Book)

If We Were Villains (Audiobook CD)

Have you read If We Were Villains? Let us know what you thought in the comments below.