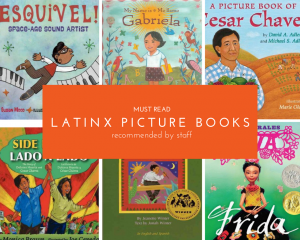 Share the life stories of inspiring Latinx historical figures with your little ones. These colorful, informative, and engaging picture book biographies are great for young children of all ages.

Check out the Latinx Heritage Month activities happening at San Mateo County Libraries during September 15 - October 15. These events are sure to appeal to all ages!

Esquivel!
by Susan Wood and Duncan Tonaiuh
Unique, pioneering, and cool, Esquivel created amazing experimental music. He started playing piano at age 6 in Tampico, Mexico, and later became a professional musician who created the space-age music of the future!

My Name Is Gabriela
by Monica Brown and John Parra (English and Spanish)
As a young girl in Chile, Gabriela Mistral taught herself to read, and by the age of 15, she became an elementary school teacher. She traveled the world and in 1945 became the first Latin American writer to receive the Nobel Prize for Literature.

A Picture Book of Cesar Chavez
by David A. Adler, Michael S. Adler, and Marie Olofsdotter
The child of farmers in Yuma, Arizona during the Great Depression, Cesar Chavez worked while attending school (65 different elementary schools since his family moved around so much). As an adult in San Jose, Chavez led human rights movements for farm workers and was posthumously awarded the Presidential Medal of Freedom.

Diego
by Jeanette Winter and Jonah Winter (English and Spanish)
Born in Guanajato, Mexico, Diego Rivera started his art career with colored chalk. As a child, he drew so much with chalk that his father made him his own colorful art studio. He went to art school and was soon painting what he saw in real life. His murals and paintings are exhibited throughout the world.

Viva Frida
by Yuyi Morales
This wonderful book features handmade sculptures by Yuyi Morales, photographed in detail, with simple, striking text that will help even the youngest children learn the life story of the artist Frida Kahlo.

What inspiring picture book biographies have you read?