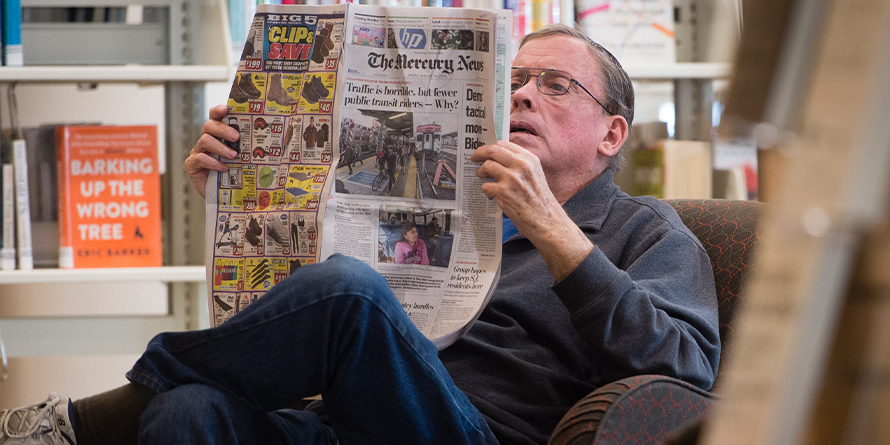 Do you love local history? Do you enjoy looking through old newspapers for interesting lore and pictures from your hometown? Or maybe you’re a vintage ad aficionado? Our microfilm collection, opens a new window is now completely digital! Instead of going into the library to use a microfilm machine, you can peruse these archives at home!

You can now dive deep into the historical archives of the following newspapers from San Mateo County:

The San Mateo County Libraries’ digital microfilm is hosted on a service called Digital ReeL, opens a new window, which provides an exact online replica of the original newspaper. You can browse by publication title, year, and issue date. You can also do keyword searches across the full collection or individual titles.

There is also an option to download a full issue to your computer or you can use the clipping tool to save an article or image. 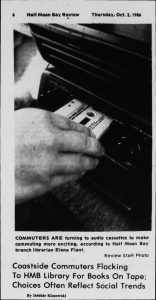 Warning: Looking through our digital newspaper archives is highly addictive and may result in time lost in history! There are so many fascinating stories from around our county. Here are a few highlights we found from the archives:

In 1921, drivers taking San Mateo Road (now more commonly known as Highway 92) between Half Moon and San Mateo reported seeing “jazzy actions of heraldic ghosts” on “dark, dismal nights” which caused “many a nervous tremor.” Non-superstitious drivers, however, reported that it was merely a reflective road sign, which could look ghostly depending on the brightness of your headlights. Either way, this was thrilling enough information to make it into the April 15, 1921 issue of The Coast Side Comet, the newspaper of the time for the San Mateo County coast.

Did you know that in the early 1970s, there were plans to build an island, a bird sanctuary, concession stands, and a 400-space parking lot on the Brisbane Lagoon? There were a lot of hurdles, however, including the cleanliness of the lagoon water for swimming, fears of overdevelopment by the town of Brisbane, and vandalization. The August 7, 1975 issue of the Brisbane Bee-Democrat details the tension over the plan between the county and city council.  As we all know now, the project never got underway.

On October 2, 1986, The Half Moon Bay Review highlighted the surge in popularity of books on tape at the Half Moon Bay Library with commuters and quilting groups. The librarian at the time warned that these books on tape could be quite addictive and noted that she tried to avoid purchasing unabridged versions of books because they could be up to 18 tapes long!

What interesting pieces of local history have you discovered so far? Let us know in the comments.