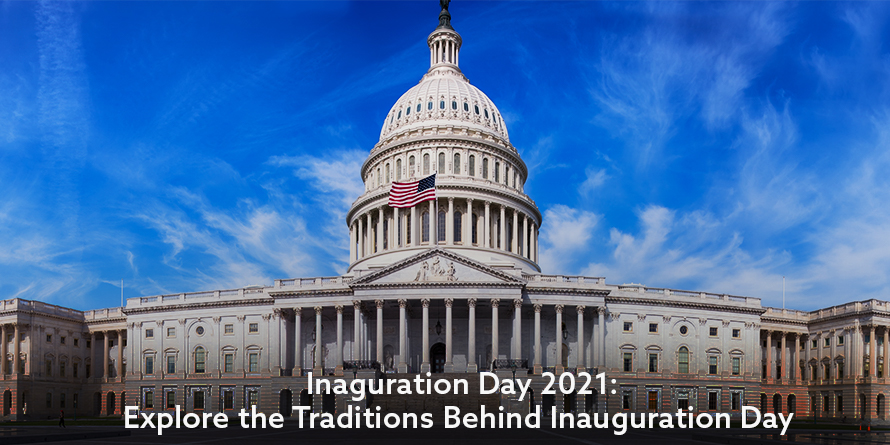 Although you might think of Inauguration Day as being very structured and straightforward, did you know that the recitation of the presidential oath of office is the only part of the ceremony mandated by the Constitution? In fact, many of the traditions we associate with the event — like putting your hand on a Bible while reciting the oath and hosting the event outside for the public — were implemented by various presidents as they were sworn in.

From the parade to the swearing-in procedures, most inauguration traditions have evolved over time.

You may have heard that the addition of “so help me god” to the end of the oath was first implemented by George Washington when he was inaugurated in 1789, but this cannot be confirmed. Many historians contend the first time it was contemporaneously recorded was Chester Arthur’s inauguration in 1881. Following Arthur, every subsequent president has added the phrase to the constitutionally mandated oath: "I do solemnly swear (or affirm) that I will faithfully execute the Office of President of the United States, and will to the best of my ability, preserve, protect and defend the Constitution of the United States.”

In 1801, John Adams was the first president not to attend his successor's inauguration. According to an excellent article from the Library of Congress, John Adams and Thomas Jefferson maintained a close friendship, but when they ran against each other, the two became rivals. Hours before Jefferson was to be sworn in as the third president, Adams left Washington to head back to his farm in Braintree, Massachusetts.

The 1801 inauguration also sowed the seeds for what has also become a modern tradition. Jefferson "dressed down" for his inauguration by wearing modest clothes and instead of riding in a carriage, he walked to and from the ceremony. Jimmy Carter revived this tradition in 1977 by wearing a moderately inexpensive suit and stepping out of his limousine during the motorcade to walk part of the way. He wrote that he did this to express his confidence “in the people of our country” and to impart “a reduction in the imperial status of the president and his family.”

And did you know that it was an unofficial tradition for many presidents-elect to wear a top hat for their inauguration? Dwight D. Eisenhower was the first in a line of presidents not to wear a top hat, choosing to wear a homburg hat at both of his inaugurations. The hat he wore at his second ceremony took three months to make and was called the “international Homburg” as skilled hatters from ten countries had a hand in fashioning it. His successor, John F. Kennedy, attempted to bring the top hat back, wearing it with a formal day dress and striped trousers but took it off as much as he wore it. Kennedy has since been the last president to wear a hat at all during an inauguration.

It’s important to recognize the inaugural traditions that our first ladies have spawned. It is possible but not confirmed that Dolley Madison was the first to attend her husband’s inauguration in 1809. She was, though, the first presidential spouse to organize an inaugural ball. Lady Bird Johnson became the first first lady to hold the Bible for the presidential oath of office in 1964. This tradition has been followed by every first lady since.

It's also worth noting that history will be made this year and a woman at long last will be more than just a "first lady." Standing next to the president this Wednesday will be our countries' first female vice president, who will also become our first African American and Asian American vice president.

Do you have a particular tradition on Inauguration Day? Let us know in the comments section!