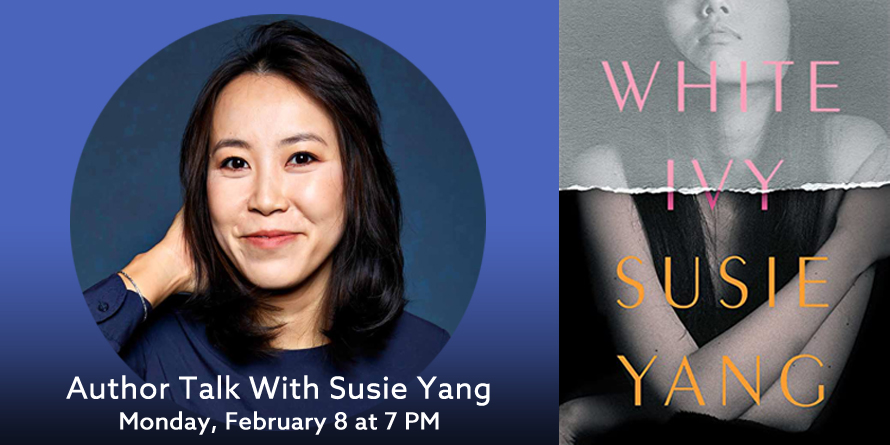 White Ivy twists the classic American Dream story, following Ivy Lin as she's raised by her immigrant grandmother who teaches her how to acquire the guise of a typical teenager by stealing from yard sales and second-hand shops. Drawing the attention of golden boy Gideon Speyer brings familial punishment from her mother, who sends Ivy to China. Returning to America years later, Ivy's conflicted thoughts on her background only increase her drive to attain her own privileged American Dream, no matter who she'll have to sink her claws into to achieve it.

White Ivy is a New York Times bestseller, longlisted for the Center for Fiction's First Novel Prize, and listed as Best Book of the Month across multiple platforms. White Ivy is Yang's debut novel and is in development as a limited series on Netflix with Shonda Rhimes attached as the executive producer.

What begins as a story of a young woman’s struggles to assimilate quickly becomes a much darker tale of love, lies, and obsession, in which there are no boundaries to finding the fulfillment of one’s own dreams. Yang’s skill in creating surprising, even shocking plot twists will leave readers breathless. — Library Journal (Starred Review)

White Ivy is dark and delicious. Ivy Lin eviscerates the model minority stereotype with a smile on her lips and a boot on your neck. Cancel your weekend plans, because you won't be able to take your eyes off Ivy Lin. — Lucy Tan, author of What We Were Promised

The intelligent, yearning, broken, and deeply insecure Ivy will enthrall readers, and Yang’s beautifully written novel ably mines the complexities of class and privilege. A sophisticated and darkly glittering gem of a debut. — Kirkus

Susie Yang was born in China and came to the United States as a child. After receiving her doctorate of pharmacy from Rutgers University, she launched a tech startup in San Francisco that has taught 20,000 people how to code. She has studied creative writing at Tin House and Sackett Street.