Throughout the month of November, National Native American Heritage Month, opens a new window recognizes the significant contributions the first Americans made to the establishment and growth of the United States. There are more than 500 federally-recognized Native American tribes, opens a new window. Each tribe has its own set of cultures, languages, and traditions that have been passed down to their current generations. So, it’s usually preferable to refer to indigenous peoples by their specific tribal name, rather than by broader terms like Native American or American Indian.

This month offers an opportunity to learn more about Native American tribes. It also raises awareness about “the unique challenges Native people have faced both historically and in the present, and the ways in which tribal citizens have worked to conquer these challenges," says the National Congress of American Indians., opens a new window

San Mateo County Libraries is offering various Native American workshops and events in honor of the rich and diverse cultures, traditions, and ancestry of indigenous peoples. 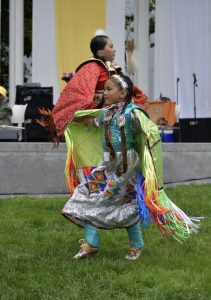 Flute Playing and Storytelling With Juliet Small
Flutist Juliet Small will talk about different kinds of flutes. She will play the Native American flute along with telling the creation story of the native flute.

Ohlone Activities from San Mateo County Parks
Rock Grinding: The Ohlone used grinding stones to prepare food for eating. Get a chance to grind grains using a grinding rock that was discovered in one of our parks.

Fiber Braiding: The Ohlone relied heavily on fiber in their everyday lives whether it was for creating nets, rope, baskets, clothes or their shelters. Get a chance to braid fibers together to create a memorable keepsake.

Plant Sorting: The Ohlone have lived here for thousands of years and discovered many uses for many different plants and animals. Test your knowledge by sorting what the Ohlone used certain plants for.

Stave Game: The Ohlone played many different games just like us! Learn how to play the Stave Game and make a set of staves to bring home!

Beaded Medallion Craft
Learn how to do beadwork by creating your own rosette, or medallion, for Native American Heritage Month.

Paint Like Helen Hardin
Helen Hardin (May 28, 1943 – June 9, 1984) (Tewa name: Tsa-sah-wee-eh, which means "Little Standing Spruce") was a Native American painter. Creating art was a means of spiritual expression that developed from her Roman Catholic upbringing and Native American heritage. She created contemporary works of art with geometric patterns based upon Native American symbols and motifs, like corn, katsinas, and chiefs.

Christie from Christie's Creative Cupboard will bring the paint, canvas, and brushes. We do not focus on teaching how to paint but more on relaxing and letting your creativity flow.

Warrior Women & Land of Our Ancestors Film Screening
“Warrior Women” is the story of mothers and daughters fighting for indigenous rights in the American Indian Movement of the 1970s. The film unveils not only a female perspective of history but also examines the impact political struggles have on the children who bear witness. + A talk and Q and A with Rucha Chitnis and screening of 3 min short doc - Land Of Our Ancestors.

We welcome Ron Riekki, author of "My Ancestors Are Reindeer Herders and I Am Melting In Extinction: Saami-American Non-Fiction, Fiction, and Poetry" and Chef/Lecturer John Farais, Native Plant Specialist and Food Educator.

This family-friendly event includes poetry reading and food tasting. However, space is limited, and RSVPs are required.