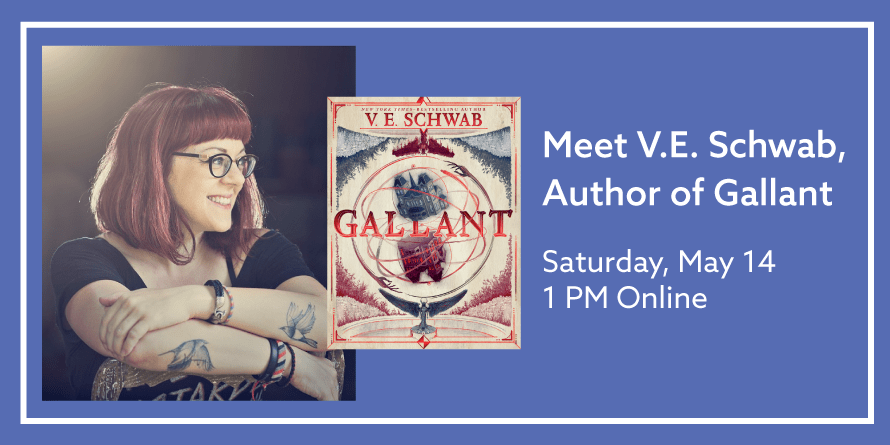 After you've registered, you'll receive your Zoom invitation and information on how to obtain a giveaway copy of Gallant!

Raised in the Merilance School for Girls, all Olivia Prior has of her past is her mother's journal, with entries that unravel into madness. After receiving a mysterious letter inviting her home to Gallant, Olivia arrives to find no one is expecting her. Even so, it feels like home, despite her hostile cousin Matthew and the half-formed ghouls in the hallways.

Olivia is determined to unveil Gallant's secrets, and when she crosses a ruined wall at the right moment, she finds herself in a place that is Gallant—but not. The manor is crumbling, the ghouls are solid and a mysterious figure rules over all...

Victoria "V. E." Schwab, opens a new window is the #1 New York Times-bestselling author of more than 20 books, including the acclaimed Shades of Magic series (A Darker Shade of Magic, A Gathering of Shadows, A Conjuring of Light, The Steel Prince), the Villains duology (Vicious, Vengeful), the Cassidy Blake series (City of Ghosts, Tunnel of Bones, Bridge of Souls) and the international bestseller The Invisible Life of Addie LaRue. Their work has received critical acclaim, been translated into over two dozen languages, and has been optioned for television and film. First Kill – a YA vampire series based on Schwab’s short story of the same name – is currently in the works at Netflix with Emma Roberts’ Belletrist Productions producing. When not haunting Paris streets or trudging up English hillsides, they live in Edinburgh, Scotland, and are usually tucked in the corner of a coffee shop, dreaming up monsters.

A haunting and beautifully tilled garden of darkness, V. E. Schwab's Gallant unearths the shadows—webs of family history, the price of deadly bargains, and the secrets we guard—plunging readers into a triumphant tale that can't be missed.—Dhonielle Clayton (The Everlasting Rose)

The evolving relationships between Olivia and her found family shine, and themes of freedom, the self, and belonging are well depicted. . . . The gripping writing and effective incorporation of horror elements, including haunting, inky artwork, are satisfyingly spine-tingling.—Kirkus Reviews (starred review)

This story strikes just the right balance between menace and melancholy, and the undercurrent of grief running beneath the suspense and horror brings emotional nuance and deep sympathy for each character . . . Schwab’s exquisite prose is rich . . . A surefire hit . . . [for] any reader looking for a dark read on a stormy night.—Bulletin of the Center for Children’s Books (starred review)

Schwab nestles this story of heritage and hope into rich, evenly paced prose. Readers of character-driven literary fiction will be mesmerized by this darkly magical tale. . . . [Gallant] will appeal to all [their] audiences.—Booklist