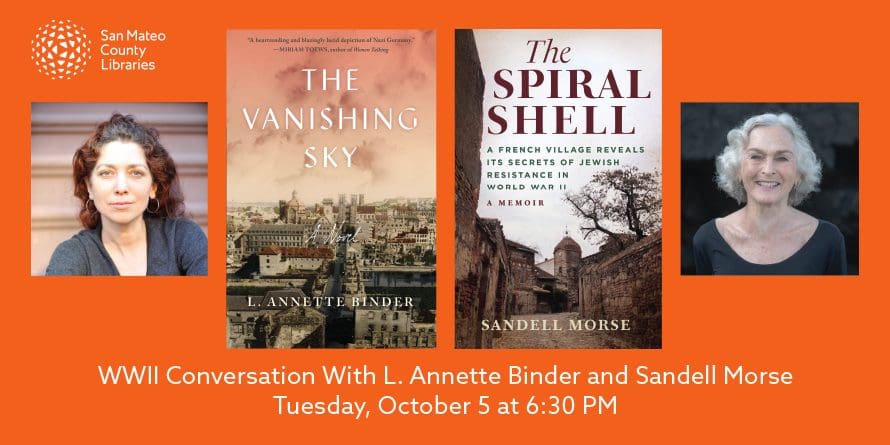 San Mateo County Libraries is excited to host a conversation between L. Annette Binder and Sandell Morse on Tuesday, October 5 at 6:30 pm! The Vanishing Sky is a World War II story through a German lens, telling of the irreparable damage of war on the home front, inspired by Binder’s own father’s time in the Hitler Youth. The Spiral Shell’s narrative unfolds and overlaps both past and present, uncovering long-silenced stories of bravery and resistance among the civilians in a small town in France during World War II, bringing Morse to an understanding of her own Jewish heritage and history denied in her childhood.

The Vanishing Sky
In 1945, as the war in Germany nears its end, the Huber family is not yet free of its dangers or its insidious demands. Etta has two sons serving their home country: her elder, Max, on the Eastern front, and her younger, Georg, at a school for Hitler Youth. When Max returns, Etta realizes something isn’t right—he's thin, almost ghostly, and behaving strangely. Etta strives to protect Max from Nazi rule, even as her husband, becomes more nationalistic. Meanwhile, Georg takes his fate into his own hands and deserts, setting off on a perilous journey home.

The Spiral Shell: A French Village Reveals its Secrets of Jewish Resistance in World War II
What started out as a research project became an unexpected rediscovery of identity and faith for Sandell Morse. After the war, “truth went underground,” and the stories of those who resisted and escaped were left buried and unheard. Morse gradually befriended and gained the trust of several individuals who shared their stories of bravery and resistance during that harrowing time, finding deeper meaning and understanding in her own Jewish heritage.

Beginning Monday, September 20, all library locations will give away promotional copies of both books while supplies last. Grab your copy and register in advance for our live virtual author event on October 5.

Praise for the Authors

Sandell Morse’s nonfiction has been noted in The Best American Essays series and published in Creative Nonfiction, Ploughshares, the New England Review, Fourth Genre ASCENT, Solstice, and Tiferet among others. She has been nominated for two Pushcart Prizes. Morse is the prize-winning author of The Spiral Shell, A French Village Reveals Its Secrets of Jewish Resistance in World War II, a Silver Medal Winner in the 2020 Story Circle Women’s Book Awards.

“The Spiral Shell is an evocative, probing, heartfelt memoir, as rich in character and detail as the best fiction.” – Alice McDermott (A Bigamist’s Daughter, Charming Billy)

“The Spiral Shell depicts two vivid journeys, one inward, as Sandell Morse explores her own identity as a Jew and one outward, as she pieces together the history of French Jews under the Vichy government. Each journey is fraught with reversals, full of unexpected details and betrayals at many levels. Secrecy, Morse discovers, is still rife around the deportation of French Jews. This is a necessary, illuminating, and beautifully intelligent memoir.” – Margot Livesey (Eva Moves the Furniture, The Hidden Machinery)

L. Annette Binder was born in Germany and immigrated to the US as a child. Her story collection Rise received the Mary McCarthy Award, and her short stories have appeared in the Pushcart Prize Anthology, the O. Henry Prize Anthology, and on Public Radio’s Selected Shorts. The Vanishing Sky is her first novel and is a New York Times Book Review Pick

“A masterful story of war, horror, and love.” — Kirkus

"Written in purposefully even prose that is nonetheless harrowing, it’s an intimate tragedy that’s all the more powerful for refusing the ending we fervently hope for." — The Daily Mail

"Achingly beautiful... Binder's work is subtle and compassionate yet also clear and devastating in its depiction of a nation—and its people—suffocating under the weight of an insidious and inhuman ideology, one that ultimately devastates those who believe its illusions. Enduringly relevant." — The Advertiser