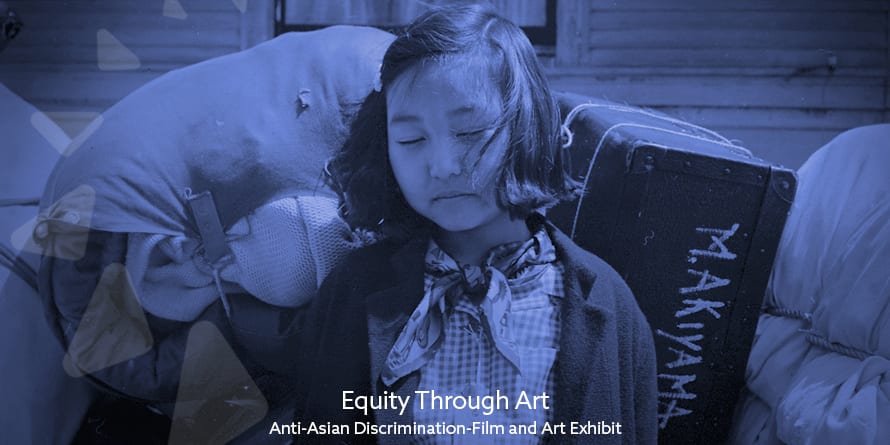 As part of our 2021-2022 Equity Through Art series in partnership with the County of San Mateo’s Chief Equity Officer, we are offering two events this October.

On Thursday, October 7 at 7 PM, watch the one-hour documentary, Tanforan - From Race Track to Assembly Center with members of your community and engage in a short conversation and Q&A with Steve Okamoto.

Did you know that when the Tanforan Racetrack was converted to the Tanforan Assembly Center in 1942 it was the second-largest temporary Wartime Civil Control Administration camp? Learn about the experiences of Japanese Americans who were interned in the camp via immersive interviews and archival footage in this documentary. Our post-movie discussion will be moderated by Steve Okamoto, former internee, and Foster City Council Member.

Silent No More: A History of Anti-Asian Discrimination

"I hope my works will build viewers' awareness of AAPI history and call attention to the racism, both historical and shockingly fresh, against our people." -- Cathy Quon

San Mateo County Libraries welcomes Cathy Quon, a San Francisco born Chinese-American mixed media artist on Tuesday, October 12 at 7:00 PM to discuss her collage and assemblage artwork entitled "Silent No More: A history of anti-Asian discrimination," which will be displayed at the Foster City Library from October 4 to 30, 2021. While incorporating some of the traditional methods of collage and assemblage, Cathy's artwork is unique in its sociopolitical bent, focusing on racism against Chinese- and Japanese-Americans. Cathy’s artwork seeks to highlight historic and present-day injustice, to both commemorate those who have suffered and to increase awareness in order to avoid repeating the past.

Register to join us on Tuesday, October 12 at 7:00 PM to meet the artist and learn about the stories behind her artwork. Cathy Quon is a second-generation Chinese-American and has lived in the San Francisco Bay Area for most of her life. She is a graduate of UC Berkeley and the University of San Francisco.