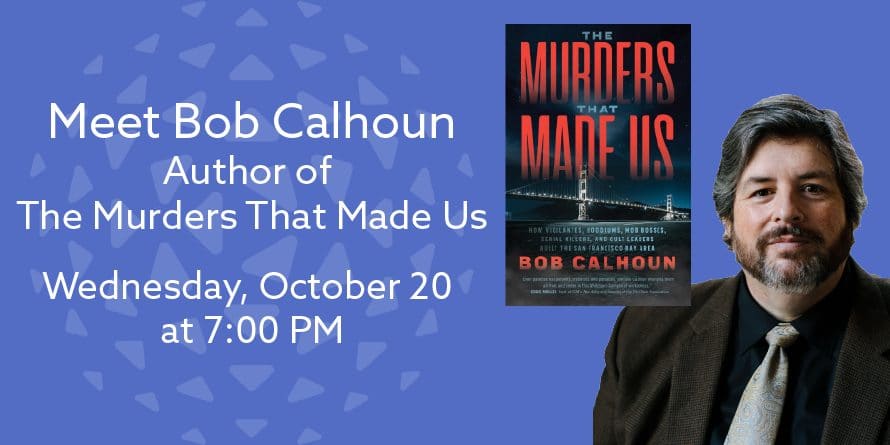 We're excited to host Bob Calhoun, author of The Murders That Made Us, on Wednesday, October 20 at 7:00 PM. Discover the story of murder and mayhem that shaped the San Francisco Bay Area into the political and economic force it is today. This event will be hosted by Peter Hartlaub, culture critic for The San Francisco Chronicle and co-host of Total SF.

The Great 1906 Earthquake shook a city that was already teetering on the brink of a massive prostitution scandal. The Summer of Love ended with a pair of ghastly drug dealer slayings that sent Charles Manson packing for Los Angeles. The 1970s come crashing down with the double tragedy of Jonestown and the assassination of Gay icon Harvey Milk by ex-cop and former supervisor Dan White. The Murders That Made Us reveals a 170-year saga of madness, corruption, and death, one crime at a time.

Place a hold on The Murders That Made Us through our catalog, or pick up a free promotional copy at any San Mateo County Libraries location beginning on Monday, October 4, while supplies last. Grab your copy and register, opens a new window in advance for our live virtual author event on October 20.

Bob Calhoun is a San Francisco Bay Area author and journalist. Since 2015, he has recounted his city’s most gruesome and lurid events in his regular SF Weekly column, Yesterday’s Crimes. His punk wrestling memoir, Beer, Blood & Cornmeal: Seven Years of Incredibly Strange Wrestling, is a national bestseller. Bob's work has also appeared in the San Francisco Chronicle, Salon.com, RogerEbert.com, Gawker, and Bold Italic.

“Calhoun’s style is irreverent and clever, and his affection for the city is clear.… Enjoy this book in short sips—there is much to savor here for both true crime fans and lovers of San Francisco. Hand this title to those who appreciated David Talbot’s Season of the Witch: Enchantment, Terror, and Deliverance in the City of Love.” — Library Journal

“Bob Calhoun’s The Murders That Made Us reveals that even the most violent aspects of San Francisco’s history are as colorful and fascinating as the city itself. This is a book for both true crime buffs and any readers who enjoy top-notch storytelling.” — Jeff Guinn (Manson: The Life and Times of Charles Manson)