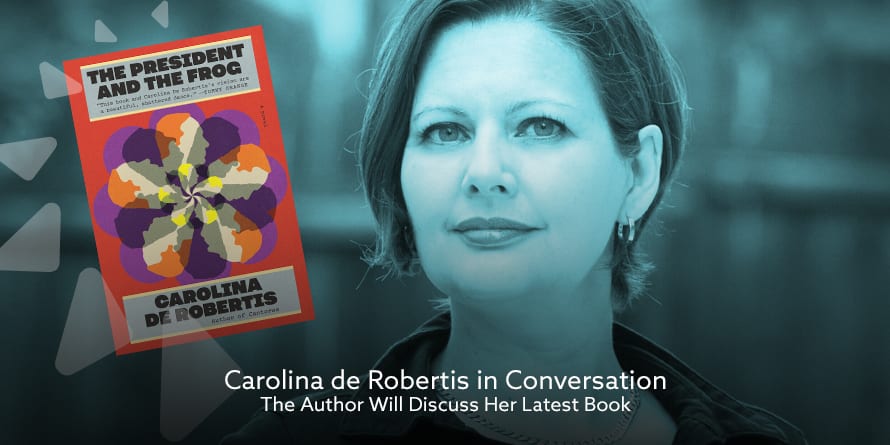 Carolina de Robertis will be in conversation with Julián Delgado Lopera discussing her latest book, The President and the Frog, and the craft of writing and translating. The President and the Frog is a timeless and timely exploration of power, revolution, and survival in which a former Latin American president reminisces on his remarkable life. Register, opens a new window in advance to join us for this virtual event on Tuesday, September 28 at 7:00 PM.

Beginning Monday, September 13, all San Mateo County Libraries locations will give away promotional copies of The President and the Frog while supplies last.

Summary of The President and the Frog

At his modest home on the edge of town, the former president of an unnamed Latin American country receives a journalist in his famed gardens to discuss his legacy and the dire circumstances that threaten democracy around the globe. Once known as the Poorest President in the World, his reputation is the stuff of myth: a former guerilla who was jailed for inciting revolution before becoming the face of justice, human rights, and selflessness for his nation. Now, as he talks to the journalist, he wonders if he should reveal the strange secret of his imprisonment: while held in brutal solitary confinement, he survived, in part, by discussing revolution, the quest for dignity, and what it means to love a country, with the only creature who ever spoke back—a loud-mouth frog.

Praise for Carolina De Robertis and The President and the Frog

Carolina de Robertis is the author of six novels, including Cantoras, winner of a Stonewall Book Award and a Reading Women Award, and a finalist for the Kirkus Prize and a Lambda Literary Award; it was also selected as a New York Times Editors’ Choice. Her work has been translated into seventeen languages and she has received a National Endowment for the Arts Fellowship, Italy’s Rhegium Julii Prize, and numerous other honors. The President and the Frog is her newest book. An author of Uruguayan origins, she teaches at San Francisco State University, and lives in Oakland, California, with her wife and two children.

De Robertis is also an award-winning translator of Latin American and Spanish literature, and editor of the anthology Radical Hope: Letters of Love and Dissent in Dangerous Times. In 2017, the Yerba Buena Center for the Arts named De Robertis on its 100 List of “people, organizations, and movements that are shaping the future of culture.”

An incandescent novel—political, mystical, timely, and heartening—about the power of memory, and the pursuit of justice, from the acclaimed author of Cantoras.

“A joy to read. Playful and profound, unearthly yet deeply rooted, this sublime and gripping novel is above all about hope: that within the world’s messy pain there is still room for transformation and healing.”—Madeline Miller, New York Times bestselling author of Circe

Julián Delgado Lopera is the author of The New York Times-acclaimed novel Fiebre Tropical (Feminist Press 2020), the Winner of the 2021 Ferro Grumley Award and a 2021 Lambda Literary Award, opens a new window; a finalist of the 2020 Kirkus Prize in Fiction and the 2021 Aspen Literary Prize. Julián is also the author of Quiéreme (Nomadic Press 2017) and ¡Cuentamelo! (Aunt Lute 2017) an illustrated bilingual collection of oral histories by LGBT Latinx immigrants which won a 2018 Lambda Literary Award and a 2018 Independent Publisher Book Award. Julián's received fellowships and residencies from Hedgebrook, Headlands Center for The Arts, Brush Creek Foundation of the Arts, Lambda Literary Foundation, Yerba Buena Center for the Arts and The SF Grotto. Their work has been nominated for a Pushcart Prize and has appeared in Granta, Teen Vogue, The Kenyon Review, McSweeney's, The Rumpus, The White Review, LALT, Four Way Review, Broadly, TimeOut Mag to name a few. He is the former executive director of RADAR Productions, opens a new window a queer literary non-profit in San Francisco.