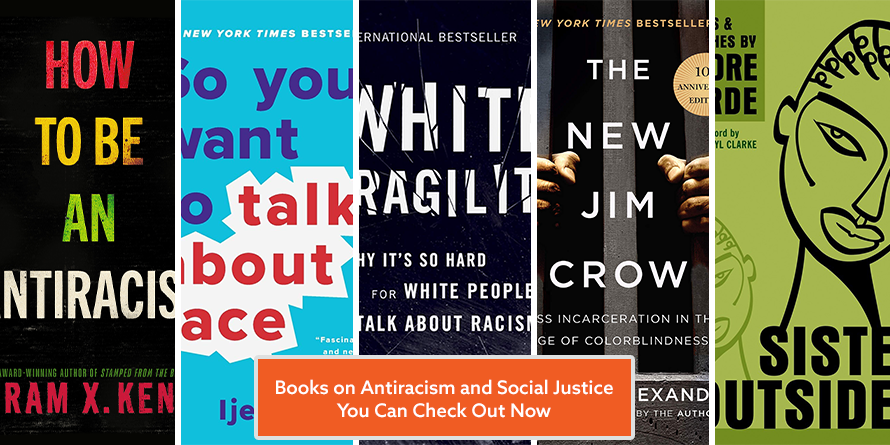 These past weeks have shown a spotlight on the tremendous injustices happening across our country. We stand in solidarity with our communities who are voicing their deep frustration and who are standing up for equity, inclusion, and social justice. To create an inclusive environment for all, San Mateo County Libraries is reaffirming its commitment to education and community dialogue around race and social justice by making a selection of titles available without holds through our shared Peninsula Library System OverDrive collection. There are no wait times, so you can take action immediately.

No Holds eBooks and eAudiobooks

How to Be An Antiracist
Kendi's book unpacks the concepts behind racist thinking and challenges readers to become antiracist. Ultimately, as a society, we need to challenge racist thoughts and adopt new ways of thinking. eAudiobook version, opens a new window available as well.

White Fragility
Robin DiAngelo's "White Fragility" discusses the defensiveness many white people feel when confronted with their privilege and racism. This book discusses constructive ways to confront these issues and begin tearing down the practice of white fragility and its inherent ability to support structural inequalities. eAudiobook version, opens a new window available as well.

Me and White Supremacy
Layla Saad's "Me and White Supremacy" started with an Instagram social media campaign asking readers to share personal stories of racist behavior they participated in. It's a book that provides practical advice to combat racism and challenge notions of white privilege. (Note: the no-wait eBook is available through Hoopla). eAudiobook version, opens a new window available as well.

The New Jim Crow
Michelle Alexander's book talks about mass incarceration of people of color becoming the modern equivalent to the Jim Crow segregation laws. (Note: the no-wait eBook is available through Hoopla)

Malcom X
Malcolm X has been best known through his autobiography (written with Alex Haley), published shortly after his death. Nearly a half-century later, Marable's reinterpretation of Malcolm's life answers questions raised by the autobiography. (Note: the no-holds is only available in eAudioBook format, opens a new window.)

Sister Outsider
In the Los Angeles Review of Books, Antoinette Nwandu discusses Lorde's "self-described [identity as a] 'black lesbian feminist warrior poet,' [with] an exceptional ability to transform her hopes and dreams toward survival and change into beautifully actionable language."

Ain't I A Woman
This classic work of feminist scholarship examines the impact of sexism on black women during slavery, the devaluation of black womanhood, black male sexism, racism among feminists, and the black woman's involvement with feminism.

Already read everything on this list? We have even more social justice books for you to check out.

Have you read any of these books? What will you read next and how will you apply it to your community? Let us know in the comments below.