Holiday season is kicking off! That usually means lots of family time. Or at least movies, TV, and books about family time. Which usually involves some family drama! 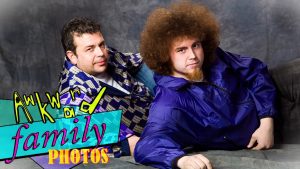 Here are my top ten young adult books that have a good amount of family drama.

What if you found out your favorite video games were all secretly training you to defend the Earth from an upcoming alien invasion? That’s what happens to Zach Lightman. One minute he’s sitting in math class, then suddenly he’s drafted to fight in the Earth defense force.

The Family Drama: Zach’s dad died in a freak accident when he was a baby. A big part of the story is about Zach discovering secrets about his father!

9.) The Truth Commission by Susan Juby

"As a project for her 'creative non-fiction module' at a school for the arts, Normandy Pale chronicles the work of the Truth Commission, through which she and her two best friends ask classmates and faculty about various open secrets, while Norm's famous sister reveals some very unsettling truths of her own."

The Family Drama: Norm’s sister is a famous graphic novelist who uses their family as inspiration for some truly awful characters. A big part of the story is Normandy and her family balancing hurt feelings with their desire to see her sister succeed.

"Manga alert! Rin never knew his parents. One fateful day he finds out that he is the son of the devil himself! Rin swears to defeat his evil father, but doing that means entering the mysterious True Cross Academy and becoming an exorcist. Can Rin fight demons and keep his bloodline a secret?"

The Family Drama: Rin is shaped by his relationship with his foster father, and his demonic heritage. Finding out secrets about his family is a big parts of this series.

7.)  See No Color by Shannon Gibney

Alex has always identified herself as a baseball player, the daughter of a winning coach, but when she realizes that is not enough she begins to come to terms with her adoption and her race.

The Family Drama: Alex’s role as an adopted daughter is a big part of this book.

"Vee's history assignment is to create a family tree, but he doesn't know anything about his family beyond his parents' generation."

The Family Drama: The story revolves around a Vee trying to complete a family tree for school. But his parent's won't tell him anything about their family history! What's the big secret?

"Feeling cast off when her best friend outgrows their shared love for a favorite celebrity, Cath, a dedicated fan-fiction writer, struggles to survive on her own in her first year of college while avoiding a surly roommate, bonding with a handsome classmate who only wants to talk about words and worrying about her fragile father."

The Family Drama: Cath has her hands full keeping up her relationship with her Father back home and her twin sister. All while trying to deal with her feelings of abandonment over her mother that left the family when she was a baby.

A small-town boy questions everything he holds to be true when his father is accused of murder.

The Family Drama: The main character must deal with a father accused of murder, and a big brother with a secret. Talk about family drama!

"Nora Lopez is seventeen during the summer of 1977, when New York is besieged by arson, a massive blackout, and a serial killer named Son of Sam."

The Family Drama: Nora deals with a younger brother who keeps getting into serious trouble, and her mother, who thinks her brother can do no wrong.

2.) The Lie Tree by Frances Hardinge

"On an island off the south coast of Victorian England, fourteen-year-old Faith investigates the mysterious death of her father, who was involved in a scandal, and discovers a tree that feeds upon lies and gives those who eat its fruit visions of truth."

The Family Drama: Faith's family isn't perfect, and after her father's mysterious death she works to find his killer while her mother does her best to keep the family together and out of scandal.

"Graphic novel alert! The Shadow Hero is based on golden-age comic series The Green Turtle, whose hero solved crimes and fought injustice just like any other comics hero. But this mysterious masked crusader was hiding more than your run-of-the-mill secret identity...The Green Turtle was the first Asian American superhero."

The Family Drama: This graphic novel follows teenager, Hank Chu, a second-generation Chinese American who takes up crime fighting (because his mom wants him to), aided by an ancient shadow spirit that gives him limited superpowers and provides some fun banter.

Well, there they are! My picks for the top ten young adult books with family drama.

Do you know a book with some family drama in it? Let us know in the comments.