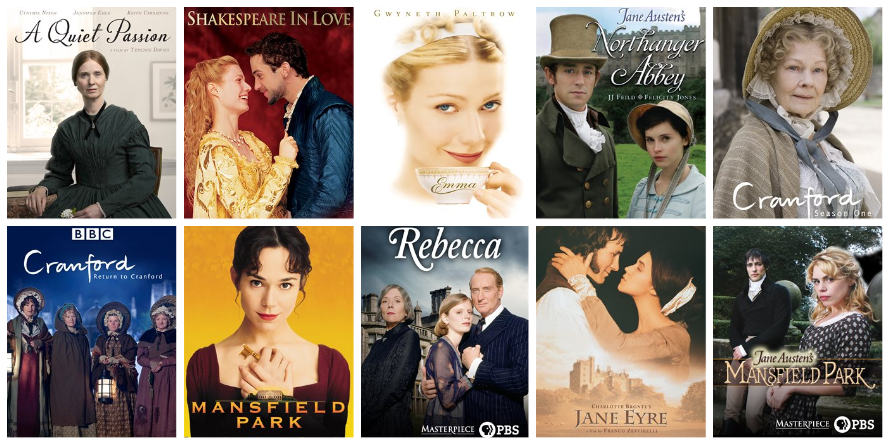 Have you already watched every season of Downton Abbey? Do you have a strong opinion about which film version of Pride and Prejudice is the best? (Ahem, clearly the 1995 BBC version with Colin Firth.) Are you looking to kick back with a warm cup of tea and some scones and escape to the English countryside of yesteryear?

If so, look no further than this list of the top 10 period dramas that are streaming on Hoopla right now! Hoopla is one of the San Mateo County Libraries’ online resources that offer streaming video, audio, and eBook content.

Hoopla Invites You Back in Time

Start your journey into the past with our period picks.

A TV mini-series based on the Elizabeth Gaskell novel of the same name in which Dame Judi Dench plays Miss Matty, an endearing resident of the rural English town of Cranford. The residents of Cranford try to hold on to their identity as the future approaches in the form of a new railway.

Cranford: Return to Cranford, Season 2, opens a new window
Welcome back the ladies and gentlemen of Cranford, an 1840s English town on the verge of the industrial revolution.

A Quiet Passion, opens a new window
Cynthia Nixon plays Emily Dickinson in this thoughtful biopic. Jennifer Ehle, who you may remember as Lizzie Bennet in the 1995 BBC Pride and Prejudice, plays Emily’s sister, Vinnie Dickinson.

Rebecca, opens a new window
Daphne Du Maurier’s novel made into a multi-part series by PBS Masterpiece Theatre will not disappoint. This love story set in 1930's England is full of gothic twists and turns to keep you guessing until the end.

Shakespeare in Love, opens a new window
This winner of the Academy Award for Best Picture will put you in the middle of Elizabethan England. Shakespeare, played by Joseph Fiennes, is struggling to write a play when he meets and falls in love with Viola De Lesseps, played by Gwenyth Paltrow. The situation grows more complicated when Lesseps, disguised as a man, wishes to play a part in Romeo and Juliet.

Mansfield Park, opens a new window
This 1999 adaptation of Jane Austen’s third novel will definitely hit the spot. Fanny Price is brought to live with her rich uncle on his English country estate. Things start to get interesting when a more worldly brother and sister duo moves into the parsonage and brings drama to the family at Mansfield Park.

Mansfield Park, opens a new window
You may also enjoy a second version of Mansfield Park, made in 2007 by Masterpiece Theatre and PBS. This version, starring Billie Piper as a blonde Fanny Price, has a definitely different feel and tone than the 1999 film version.

Jane Eyre, opens a new window
This 1996 version of Jane Eyre starring Charlotte Gainsbourg and William Hurt is worth a viewing. Jane Eyre, after a childhood as an orphan, takes a position as governess for a ward of Mr. Rochester. However, as Jane and Rochester grow closer, his past threatens to upend their bond.

Emma, opens a new window
The Gwyneth Paltrow and Jeremy Northam version of Austen's Emma is available for your streaming enjoyment! After her governess marries, Emma starts to set up her friends in often ill-fated romantic matches. Her meddling, although unsuccessful, helps her to discover her own shortcomings and romantic feelings.

Which period dramas should we watch on Hoopla next? Leave a comment below to let us know your favorites!