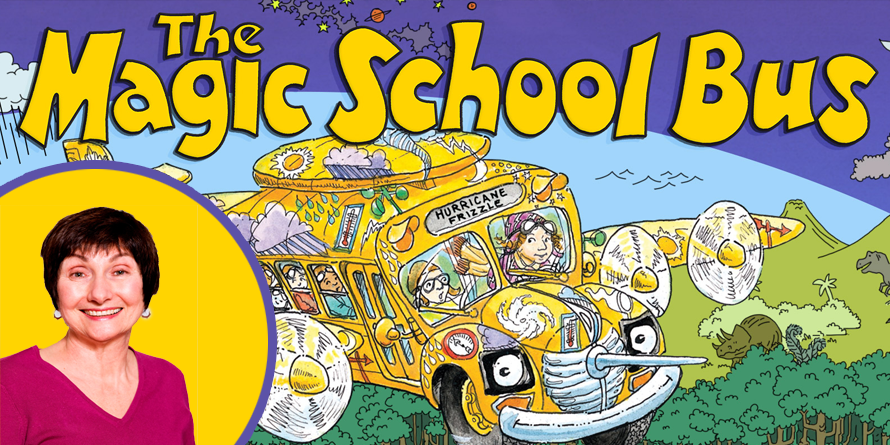 Reading is one of the best ways to go on an adventure, and Joanna Cole was one of the best at taking readers on an educational adventure! Sadly, the world lost the author on July 12, 2020. Cole, who lived in Sioux City, Iowa, passed away from idiopathic pulmonary fibrosis according to Scholastic, opens a new window.

One of the wonderful characters from the Magic School Bus series is Ms. Frizzle.  She was not only the most adventurous science teacher a fourth grader could have, but she also gave great advice. One of her favorite things to say was, "Take chances, make mistakes, get messy!" The popularity of the book series led to an animated TV series, opens a new window (available on our Hoopla digital service) that originally aired on PBS in 1994 with Lily Tomlin starring as Ms. Frizzle.

Cole graduated from the City College of New York with a B.A. in psychology, but it was her work as an elementary school librarian that made her want to write for children. Her love of science and creativity led her to combine well-researched science information with fantastical journeys taken through time, space, and even the human body! She also wrote books that gently explained life journeys such as becoming a big sister or going to the doctor.

Ms. Cole will truly be missed by all who read her books and were inspired to learn something new. Teachers, librarians, parents, and readers will be forever grateful for her ability to educate with humor and imagination.

To celebrate Ms. Cole's life, here is a selected list of her works:

The Magic School Bus in the Time of the Dinosaurs

The Magic School Bus Lost in the Solar System

The Magic School Bus on the Ocean Floor

Cole also has a new book that will be published next spring entitled The Magic School Bus Explores Human Evolution., opens a new window Cole will be remembered fondly by many generations of young readers who love science and enjoyed going on fantastic adventures through her books.

Did any of Ms. Cole's adventures inspire you? Tell us your favorites below!