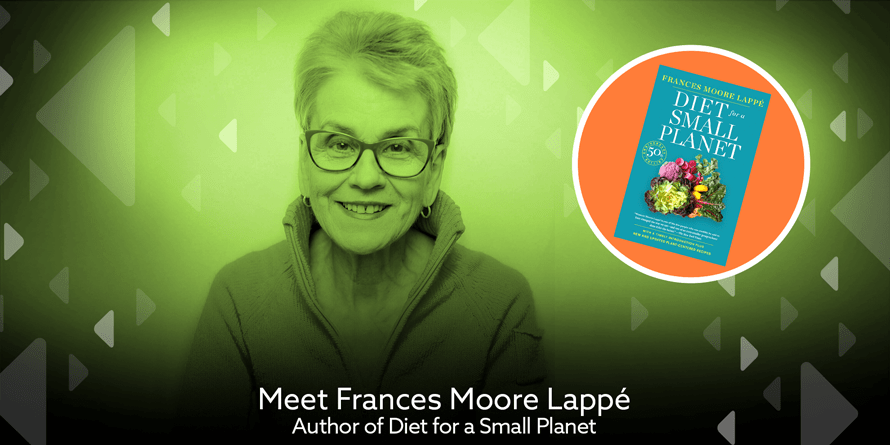 San Mateo County Libraries welcomes Frances Moore Lappé and her daughter Anna Lappé on Wednesday, September 7 at 5:00 PM. Frances Moore Lappé will introduce us to her revised and updated book Diet for A Small Planet before taking questions from the audience.

Once you've registered, you'll receive your Zoom invitation to join us for an evening of discovery!

Saving the Planet for 50 Years, One Bite at a Time.

You might not remember when Diet for a Small Planet first broke ground in 1971 and started an Earth-healing, plant-based, day-at-a-time revolution. If you do, you'll know that Frances Moore Lappé's message matters just as much now: a meat-centered diet has a steep cost to our global environment. As a lifelong activist and renowned food expert, Lappé shows how plant-centered eating can heal the earth, help the climate crisis and even promote democracy.

New in the 50th anniversary edition, Lappé delves into her life's journey since 1971 as a world-famous food revolutionary—and invites us to join her cause.

Frances Moore Lappé is the author of 20 books, many focusing on themes of “living democracy,” including the best-selling Diet for a Small Planet. She is the recipient of 20 honorary degrees and the Right Livelihood Award, opens a new window, often called the “Alternative Nobel.” Before becoming an environmentalist, Frances served as a welfare activist fighting against the War on Poverty in the 1960s. She’s also a co-founder of Oakland-based Food First, opens a new window, as well as Small Planet Institute, opens a new window, which she and her daughter Anna Lappé lead together.

A small number of people in every generation are forerunners—in thought, action, spirit—who swerve past the barriers of greed and power to hold a torch high for the rest of us. Lappé is one of those. —Howard Zinn, author of A People’s History of the United States

Since the publication of [Diet for a Small Planet], a movement dedicated to the reform of the food system has taken root in America. Lappé’s groundbreaking book connected the dots between something as ordinary and all-American as a hamburger and the environmental crisis, as well as world hunger. —Michael Pollan, The Nation