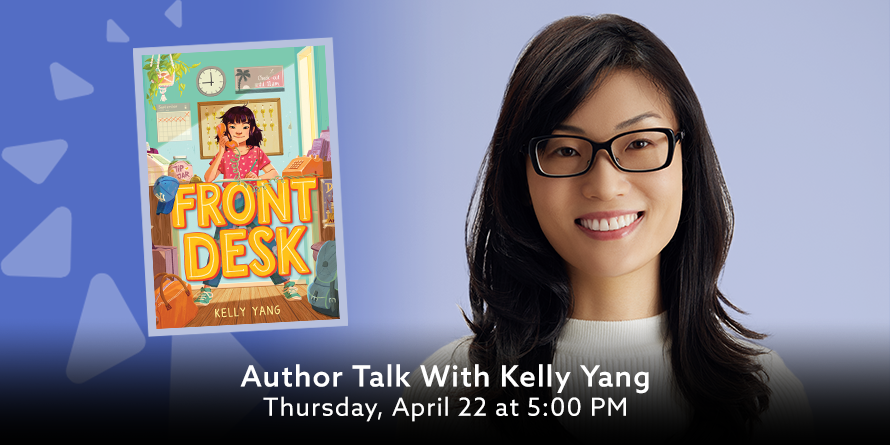 Front Desk is a New York Times bestseller and won the 2019 Asian Pacific American Award for Children's Literature. The book tells the story of 10-year-old Mia and her parents, recent immigrants from China who are desperate for money and take a job managing a rundown hotel in Southern California. While her family struggles to live a prosperous life, Mia discovers that her writing has the power to fight injustice. Front Desk is a heartwarming story with an important message about tolerance and the immigrant experience in America.

The novel is loosely based on Yang's experiences. She immigrated to American when she was six years old and worked in three different motels with her parents. Yang went to college at age 13 and graduated from UC Berkeley. She later graduated from Harvard Law School, but gave up law to pursue her passion of writing and teaching children writing. She is the founder of The Kelly Yang Project, opens a new window, a leading writing and debating program for kids in Asia. In addition to publishing three books, her writing has appeared in The New York Times, The Washington Post, and The Atlantic. She has three children and splits her time between Hong Kong and San Francisco.

"Debut author Kelly Yang weaves in autobiographical content while creating a feisty and empowered heroine. The supporting characters are rich in voice and context, with multiple villains and friends that achingly reveal life in America in the 1990s for persons of color and those living in poverty. Heavy themes, including extortion, fraud, and racism, are balanced with the naïve dreams and determination of a 10-year-old." - Kirkus Reviews, starred review.

"Basing the story on her own childhood experiences, Yang writes Mia's dreams into reality without sacrificing or minimizing the heartbreaking realities of many immigrants' hardships. Resilient Mia stumbles over and over again, but she satisfyingly picks herself right back up, often with the help of her parents, Calivista family, and friends." - Bulletin for the Center of Children's Books, starred review.

"Mia herself is an irresistible protagonist and it is a pleasure to see both her writing and her power grow through a series of letters that she sends to remedy injustices. Many young readers will see themselves in Mia and her friends." - School Library Journal, starred review.