We want to thank you for your support and patience as we continue to evaluate and adjust our operations due to COVID-19.  Currently, all of our library buildings are closed. However, we’re still here to support you! Click here to learn more about our innovative online services, or reach out via our new texting service to get in touch with us today. 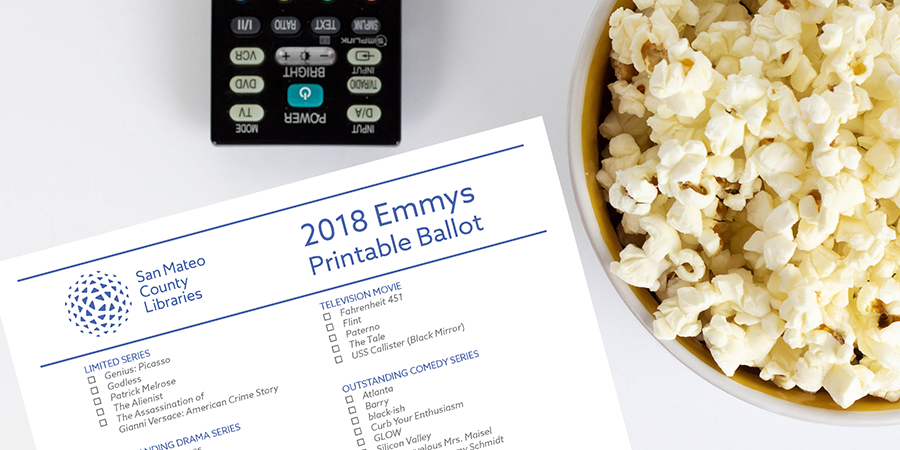 We are gearing up for the 2018 Primetime Emmy nominations coming up on Monday, September 17th! Every year the Television Academyopens a new window honors their peers by recognizing the excellent programs created over the last year in areas of craftsmanship for television and the emerging media industry. Will your favorite television show or actor take home the award? Below are a few of the popular categories.

Veep's three-year Best Comedy streak is no longer a threat to the other contenders this year. Can the Marvelous Mrs. Maisel's big Golden Globe win this year translate to an Emmy? Or can Donald Glover's historic wins for last year's Outstanding Director and Outstanding Lead Actor lend Atlanta momentum this year?

You can take a look at the full list of categories on the Emmys websiteopens a new window.

Can you predict all the winners? Use our printable ballot, fill in your predictions, and see how well you score when you watch the 2018 Emmy Awards on Monday, September 17th.

Need to catch up on the nominated shows? Click the links in the nominees list above to see what San Mateo County Libraries has to offer. You can also watch the real story of the Gorgeous Ladies of Wrestlingopens a new window (Glow) from the women that lived it.

Who are you hoping will take home the Emmy? Let us know in the comments!